In Cooking for Two, the test kitchen's goal was to take traditional recipes and cut them down to size to serve just twowith tailored cooking techniques and smart shopping tips that will cut down on wasted food and wasted money. Great lasagna starts to lose its luster when you're eating the leftovers for the fourth day in a row. While it may seem obvious that a recipe for four can simply be halved to work, our testing has proved that this is not always the case; cooking with smaller amounts of ingredients often requires different preparation techniques, cooking time, temperature, and the proportion of ingredients. This was especially true as we worked on scaled-down desserts; baking is an unforgiving science in which any changes in recipe amounts often called for changes in baking times and temperatures. 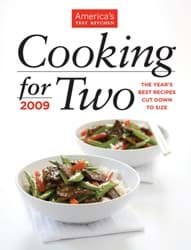